How to Motivate Yourself to Change Your Behavior

Are there behaviors in your life that you’re struggling to change? You know exactly what you’re SUPPOSED to do (or even want to do)… but the day-to-day practice of actually doing it is a struggle. You just can’t find the motivation to actually make the change. Today, we are going to talk about meta motivational regulation, which is science-speak for how to motivate yourself to change your behavior.

If we haven’t met, my name is Dr. Karin Nordin, and I have a Ph.D. in a field that specializes in health behavior. Motivation is something that I’m deeply familiar with. I’m on a mission to bring the real science of self-help to you, which is exactly what I’m doing in this week’s post. But don’t worry, I’m not going to tell you to develop discipline or be harder on yourself or just hold yourself accountable because those tips that are not actually helpful. I’m going to give you 3 tangible tools – actual activities – that you can use whenever you’re feeling a lack of motivation to change your behavior.

What actually IS motivation?

Let’s start with a little quiz.

You might be surprised to hear that this is actually false. This is incorrect because scientifically, all of our behavior as humans comes from motivation. We will not do something unless we are motivated to do it in some way, in some form, by something. That’s really important to understand.

But our motivation to act doesn’t mean feeling motivated. We can take action from a variety of different emotions, not that motivated feeling. If, for example, you’ve ever rage cleaned your kitchen, you know that that’s true.

Also, this is fun in the comments, I want you to put something that you’ve done in a fit of rage. Maybe it’s cleaning your house. Maybe you’ve done an angry revenge workout. Let me know what you’ve done from a feeling of anger or rage.

Okay, so back to it. You don’t need to feel motivated in order to take action. The people that our society labels as “disciplined“, actually have metamotivational regulation skills. This means they have the ability to generate motivation when they need that motivation. It gets them to do the things they don’t consciously really want to do.

The conscious processing of monitoring and controlling one’s own motivation to increase effort and persistence when completing a task or achieving a particular learning goal.

1. Motivate yourself to change your behavior with task-emotion matching

So this brings us to the first technique, which is called task-emotion matching. Next time you’re sitting on the couch knowing that you have to unload the dishwasher, but feeling totally unmotivated to do it, here’s what I want you to do:

Identify a task in need of completion

First, I want you to identify the task that needs to be done. In this case, the task is unloading the dishwasher.

Identify emotions that could prompt action on that task

Second, I want you to identify a list of emotions that could prompt that action. So maybe you’re feeling inspired by your future self, who’s really, really tidy, and that inspiration drives you to the dishwasher. Maybe you’re feeling fed-up with the house being messy so that fed-up feeling drives you to unload the dishwasher. Maybe you’re thinking about how peaceful you’ll feel after that dishwasher is unloaded since it’s been nagging at your brain for quite a while. Now, that could also motivate you to unload the dishwasher. Create that list of emotions, put ’em in your head, or maybe even write ’em down.

Match the most accessible emotion to the task

From there, you’re going to look at those emotions and pick the one that feels most accessible at that moment. So if you’re in a really, really bad mood, jumping to a feeling of inspiration probably isn’t going to happen. But you can maybe tap into that fed-up feeling. Or maybe you’re really, really seeking that peaceful feeling, and so you want to tap into that. Pick the emotion that is going to feel closest to where you are now and do your best to feel that emotion with your whole body. This is going to elevate your level of motivation and get you to start taking that task on.

2. Motivate yourself to change your behavior with the Tiny Task Method

That brings us to technique number 2, which is the tiny task method. Oftentimes when we’re unmotivated, it’s because the thing that we need to do is really big or really scary. For example, one of the things I’ve heard from my clients that’s really scary is the process of editing your resume. You feel totally unmotivated to do it.

This is exactly the relationship between motivation and the task that you’re about to do. One of the easiest ways to motivate yourself is to break that task down into tiny, tiny, tiny steps.

Going back to the dishwasher example, if unloading the dishwasher feels like a massive task at that moment, what you can do is just work on motivating yourself to get up.

Maybe that looks like telling yourself, I’m going to stand up and refill my water bottle. What you’re doing when you stand up and refill your water bottle is building momentum. Then once you’re up and you’re walking, it’s much easier to motivate yourself to just go look in the dishwasher. From there you can say, Oh, I’ll just unload the bottom rack of the dishwasher. And so on. Then, *POOF!* In no time, you’ve unloaded the whole thing.

3. Motivate yourself to change your behavior by leveraging your values

Technique number 3 is a quick one: tap into the reasons the task relates to or embodies your values. For example, let’s say you really highly value peace in your relationships. And let’s say that when the house is tidy, you and your partner tend to be much better friends. If that’s the situation, maybe you can tap into that value in order to motivate you to unload the dishwasher.

You may be thinking, Karin, how am I supposed to know what my core values are that I’m embodying on a daily basis? If that’s the case, check out my completely free Future Self Mapping mini-course. In it, I guide you through the process of establishing your core four values. By the end, you’ll have a clear plan for moving from your current 1.0 self to the person that you want to be.

Now, the last thing I’ll say is that motivation regulation is a skill, and unfortunately, it’s not one that we’re taught in school. However, it is something that you can learn if you practice over time. I know that because I have seen tons of clients in our behavior change coaching program develop that skill. They go from feeling unmotivated to do the things that matter to them, to generating motivation on cue and getting the things they want to do… done.

P.S. If you’re having trouble breaking down your goals, check out this video, which is all about that exact process. 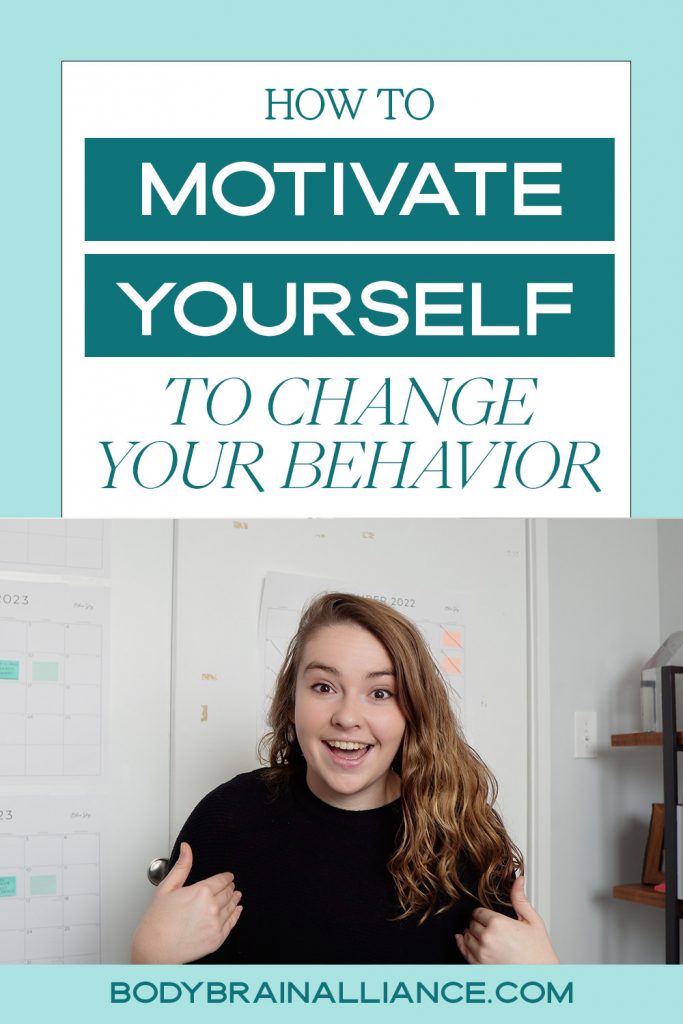 Want to BUILD A MORNING EXPERIENCE YOU ACTUALLY LOVE?

READY TO BUILD YOUR BRAIN AS INTENTIONALLY AS YOU BUILD YOUR MUSCLES?

Episode 53: Breathwork and The Art of Trying New Things

On the gram @karinnordinphd
You can't hate yourself into self-accountability.

Transparency is a core value of mine. ⁠ ⁠ It's

HOW IT HAPPENED: My best guess at the answer to th